Marine Reserves:
Did You Know?
Some Marine Protected Areas are designated as “marine reserves,” offering the highest level of protection.
Studies show that there can be over 20% more species inside a reserve than outside.
Fish and invertebrates are typically 28% bigger inside reserves and produce more young.
Less than 0.01% of the ocean is protected by marine reserve status.
Most marine reserves cover less than 1.5 square miles.
There are 13 fully protected marine reserves in Central California, covering 7.5% of the region.
Over 90% of Central California waters remain open for fishing and collecting shellfish or seaweeds.

Email ThisBlogThis!Share to TwitterShare to FacebookShare to Pinterest
Labels: Fish 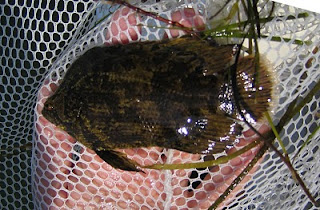 Five summers ago, while motoring in Teach's Hole, the boys netted this lovely Tripletail. It was floating on its side under a mat of Sargassum weed. We put it in the bucket with the other fishes and crustaceans the boys had found. We marveled for a while, then let them all go.
OF NOTE: Juvenile Tripletail can be bright, mottled yellow, and mimic fallen magrove leaves.
Posted by Val Kells No comments:

Who knew gobies could threaten much of anything...

Scientists to explore sex lives of gobies
Posted by Val Kells No comments:

Email ThisBlogThis!Share to TwitterShare to FacebookShare to Pinterest
Labels: Research 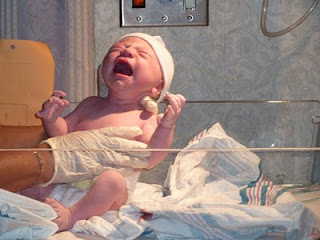 Will has graced this world with his presence. Wendy and Randy brought him into our lives on March 25 at 12:44 am. (That said, Wendy did the lion's share of the work...Hello!). I hope I live long enough to go fishing with Will. There is so much to share. He with me, I with him.
Posted by Val Kells No comments: 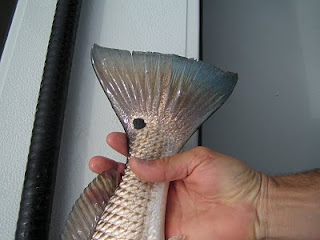 While fishing around Hilton Head recently, I noticed something I hadn't before. The distal margins on the caudal fins of the smaller Red drum were a metallic blue. The water these fish came from was behind Daufuski Island - shallow, marsh, and very murky. The larger drum, and the drum in clear water we caught that day, had lost this coloration.
The photo does not do this color justice. It was a surprising revelation.
OF NOTE: The lateral line of drums usually extends into the caudal fin.
Posted by Val Kells 1 comment: 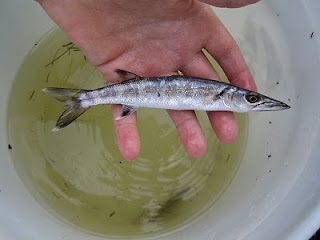 This little guy was fortunate (or unfortunate) enough to be within casting reach. Younger son and I were pitching the net across the canal in hopes of finding some juveniles for my upcoming book, "Fishes of Chesapeake Bay". We'd shredded the net on oysters in our efforts, but managed to land quite a few specimens.
Interestingly, this barracuda was quite docile. It did not flip-flop or squirm. It posed nicely for several pictures and was released somewhat unharmed. It did lose a few scales in the process, but may be imortallized in the book.
OF NOTE: Baby barracuda find harbor in marshes, canals, under pilings. Once large enough, they move offshore and school with like-sized kin. As full adults, they menace wrecks and reefs. Great on fly and tackle. Some folks like to eat them. We let them go.
Posted by Val Kells 1 comment: