This is a very flattering article about me, my coauthor, Kent, and our new book.

Yes, those are jars and jars full of fishes behind him. Of all the fishes he studies, Porgies get the most of his attention. I plan to add to his porgy collection when I finally deliver 3 specimens of a mystery porgy I caught off Ocracoke... but I digress...!
Posted by Val Kells 2 comments:

Email ThisBlogThis!Share to TwitterShare to FacebookShare to Pinterest
Labels: The Book 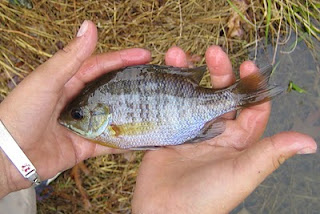 When my boys had both learned the art of walking, I began to teach them the art of fishing. I'd block off a whole afternoon for this activity, as taking a 2- and 4-year old fishing could take from one to seven hours, depending. As boys go, their attention span was like that of a comet: here, then gone. But I was not deterred. I knew this lengthy and messy endeavor was an important use of my time.

Boys are awesome. Mine had no hang-ups about getting dirty or tromping through stickers in persuit of slimy, smelly brim or bass. They loved mechanical things, and sharp things, and dangerous things. They'd rather muck about in the woods than watch TV. Teaching them about being in the wild was a big part of raising them up. My only concern in taking them fishing was keeping them from hooking themselves, eachother, or me... Needless to say, they hooked a lot of trees, limbs, leaves, and logs. But, I told myself, lures are cheap. Emergency rooms are not. Go ahead and lose the lures. And besides, the costs of those lessons were far eclipsed by the lessons learned.

We started out on Hodgeson's pond. The Hodgeson's did not own this tiny pond, but since we tromped through their place to get there, and since Mrs. Hodgeson gave the boys cookies upon return, it was and will forever be 'Hodgeson's Pond.'

The pond is full of hungry brim, bass, and frogs, all of which scattered upon our arrival because the boys were, as boys are, very loud. And they liked to throw stuff in the pond. It was only many years later that they developed the art of stalking. In the early years, it was more of an assault by flying rocks, sticks, stones, and dog toys. (Donated unknowingly by the Hodgeson's dogs.) We'd come armed with worms, of course, but the boys found more pleasure in ambushing frogs and skimmers with branches and clods of mud. They had little patience for watching a bobber.

Years passed and we kept trekking to Hodgeson's Pond, with worms and gear, and food and drinks and Beanie Babies. The boys learned how to bait a hook, cast, watch the bobber, strike, reel, and take a Bluegill off. I taught them the importance of respect. "This lovely fish is here in our hands and it can't breathe. Admire it, kiss it and let it go." And they did.

Later still, I graduated them to the joys of saltwater fishing. This opened a whole new world for them. But, they had the foundation and became able marine fishermen. Yes, I still had to pack the gear, and the bug spray, and the snacks, and the bait. Just like fishing the pond, fishing the marsh creeks and island points was a lot of work for me, but a lot of fun for them.

During our first summer on Bald Head Island, I'd pack all the gear, slather the boys in sunscreen and bug spray, and we'd head out over the dunes. It was a good half-mile walk to the Cape. I'd drag all the gear behind me on boogie boards while the kids romped in the surf. Finally, at the Cape, we'd set up shop. The rods dwarfed them, but these little boys had no fear. I'd rig them up with the warning, "Watch your back-cast!", and away they went. Sharks, Kingfish, stingrays, searobins. They caught it all, and they knew how to handle the catch - mostly! There was an occasional stick or sting, but we all survived and thrived and fished some more.

Since then I've taken them fishing inshore, offshore, Bahamas, Outer Banks, Maine... and our usual local spots like the James and Rappidan Rivers. Yes, they still like to throw rocks. But they also know, really know, how to fish.

Now my boys are grown. My younger son turned 18 today. That's him up top with 'Mr. Fish' in his hands. We still go fishing together, when he is home from school, or when we make our yearly pilgrimage to Ocracoke. And I am proud to say he can now outfish me - when he wants to.

Raising sons is work. Raising them well is a lot of work. But it's work worth doing. Heck, ya might even get a fishing buddy in the bargain.
Posted by Val Kells 3 comments:

Click here for article.
I'm not fully educated on Hawaiian culture, and don't really understand the surfer's and fishermen's objections. If there were no shark-related injuries due to shark tour boats feeding sharks, and if the shark tour boats weren't breaking any laws, then what is the problem? An increase in shark activity may lead to a decrease in fish populations, but not necessarily because fishes are being eaten. Irrespective of the conflict, the tour owners hardly "brought it upon themselves." Fire on a boat is a very serious matter!

At this point in the tug-of war over sharks, I'd have to say that any venture that promotes interest, intrigue, or understanding of sharks is A-OK with me. And feeding sharks will never 'tame' them. When the food runs out, I seriously doubt they will stick around and starve waiting for the next handout.

It seems to me that these folks need to agree to disagree and get on with life.
Posted by Val Kells No comments:

Dan Barber: How I Fell In Love With A Fish

This is pretty darned insightful. Worth the 20 minutes of your time... If you care to delve deeper, a good read is "Four Fish" by Paul Greenburg.

">
Posted by Val Kells No comments: 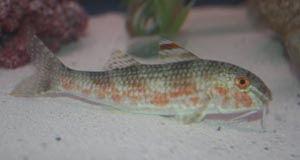 I'd stumbled upon Mark's essays in my many internet travels. On one page he'd put up a small thumbnail photo of what looked like a Red goatfish. The photo was too small to definitively ID, so I took the leap, and sent him an email asking if it was a Red goatfish, and would he be willing to share a larger photo?

I'd sent many cold-call emails over the course of researching the illustrations for the book. Many of the folks I'd contacted replied and either helped me enormously, or replied with regret. Very few requests were ignored. I realized that these folks had nothing to gain from helping me, other than the satisfaction of giving and contributing to our book. There were many people who went above and beyond my simple requests. Mark was one such person.

He wrote back that, indeed, the photo was of a Red goatfish. And amazingly, he had others in tanks at his Center. Not only that, he offered to photograph the fish in his tanks and email the photos to me! Jackpot!

I waited with great anticipation. This goatfish is a common nearshore fish, but one that had not been extensively recorded. It had been misidentified in a prominent ID book, which further complicating my efforts. I'd made many requests in search of information, and had always come up empty. Anyway, the photos arrived in my inbox. Some were blurry, others dark, but they were definitely Red goatfish, and I could confidently use them to illustrate this missing link.

So, the goatfish section is complete and comprehensive, thanks to a virtual stranger with similar passions and a willingness to share. Thanks, Mark!
Posted by Val Kells 1 comment:

Email ThisBlogThis!Share to TwitterShare to FacebookShare to Pinterest
Labels: The Book 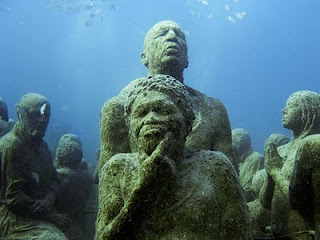 As an artist (and now, teacher), I am very sensitive to artistic critique. OK, go back...

When I was in high school, my art teachers broke me down, criticized my work, prodded me to change, change, change. They found little in my style or choice of subject to praise. Ultimately, I gave it up to focus on my second love: Marine Science. It wasn't until years later that I stumbled upon a professor and a program that encouraged BOTH of my talents: art and science. In the end, I was lucky. I've had a wonderful career, and have been able to parlay both passions into a lasting legacy.

Now, as I teach 60 middle school boys the art of Science Illustration, I am very careful to encourage, not criticize. Their egos can be quite fragile... at this jucture, they can feel great about their progress, or just toss in the towel.

So, I was conflicted about this 'work of art.' On one hand, art is subjective -- there is no right or wrong when it comes to art (except in the case of pornography!). On the other hand, I don't feel a natual landscape is enhanced by human art. The landscape, or seascape, is ideal and most beautiful when left untouched. And when they are defaced and defiled, well, they are just that: defaced, defiled. Examples: Mount Rushmore (Yuck!); Red Rocks (Ditto); anything created by Christo (Sorry! I don't believe cloaking landscape in fabric is an improvement in the name of art); anybody's intials carved into a tree.

I understand the need for conservation and preservation of coral reefs. They are very fragile... But to say this work of art was created as an alternative attraction to divert divers away from the reefs? Seems to me like a flimsy excuse for littering the ocean floor to create revenue. This collection of statues is no more compelling to me than a collection of rusty oil drums. It may be art, but in my opinion, it doesn't belong at the bottom of any ocean. The ocean cannot be made more beautiful by human impact. I suppose in this case, my bind to the earth won over my bind to art.
Posted by Val Kells 4 comments:

Email ThisBlogThis!Share to TwitterShare to FacebookShare to Pinterest
Labels: Oceans

Lionfish on the Table

I doubt that Lionfish will ever be completely eradicated from the western Atlantic Ocean. They are here to stay. But divers and fishermen are becoming increaslingly aware of the threat they pose to local fauna, and have been actively killing them. Lionfish are easy to kill by spear or hook-and-line, and one only needs to be careful to avoid the venomous spines. One fewer Lionfish is one fewer Lionfish!

A few months ago, I became aware that Lionfish meat is good eating, and that some divers had been collecting the fish and selling them to local restaurants. Just like other fishes, Lionfish made the menus when they were available, and only in a few places.

REEF.org has been active in organizing Lionfish 'roundups.' Those folks get it! Today, I found out they have published a new Lionfish cookbook. The book offers 45 recipes and includes background information about this invasive species. It seems like a win-win-win project: reduce Lionfish populations, provide safe and noncontrovercial food, and all proceeds go toward conservation. And, the photos make the fish look awfully yummy!
Posted by Val Kells 1 comment: