Why Am I Not Surprised?

I hope the collapse of the tuna stocks does not come to pass. But the signs are not promising. It is a contencious issue. Fishermen need to feed their families. People need to eat. But how far can tunas be pressed?
Greenpeace article
Underwater Times article
The Globe and Mail article
Posted by Val Kells 2 comments: 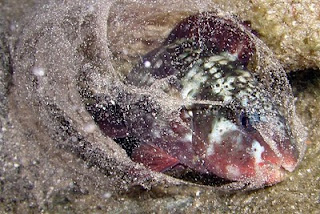 Photo Credit: Lexa Grutter
Very interesting. After reading this article one question came to mind... The parrotfishes have found a way to protect themselves during night-time rest. But, they still spend a lot of time at cleaning stations during the day. So, are these fishes MORE prone to attack of Gnathiids than other fishes? And thus have developed, at least during night-time hours, a way to prevent it? Hmmm.
Posted by Val Kells No comments:

Email ThisBlogThis!Share to TwitterShare to FacebookShare to Pinterest
Labels: Research

WOW. Fishing off of NYC.

">
Posted by Val Kells No comments:

Are the days of killing sharks for records, fins, or just plain glory FINALLY beginning to come to an end? Lordy I hope so. Here are three encouraging articles:
HeraldSun
MailOnline
SeaAngler
Posted by Val Kells No comments: 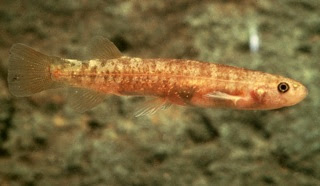 Wow. This little fish was only described 11 years ago. And if this New Zealand dam goes up, it may be gone forever.
Click here for article.
Posted by Val Kells No comments:

OK. Confession.
My son and I once caught a monster bass in a friend's pond. After we were done whooping and hollering, I realized I had no camera, no camera-in-a-phone, no sharpie marker, and no other way to measure the fish. So, I held it up to my leg with the caudal fin at my heel. I took the treble hook from the fish's mouth and made several tick marks on my leg where the jaw reached. This left what looked like a snake bite on my leg. We then let the fish go, fished a while longer, then headed to our friend's house.
Later...
Don: "Did you catch anything?"
Me: "Oh yeah! Huge fish. Look..."
Don looked at my wound and said, "Did it bite you?"

I had the scar for quite some time. Folks who knew me, understood. Folks who didn't probably thought I was nuts.

What does this have to do with this post? Besides measuring that fish, I've used hooks for many other purposes...picking my teeth, removing splinters, killing ticks. But I've never DUG the hook into myself as a Public Service Announcement!
This is a doozy. Hope we never have to do this:

Muck Monster? What the Heck? 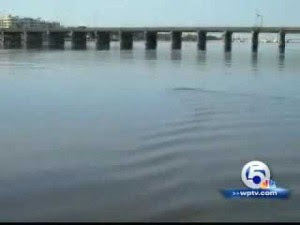 It is amazing what some people will believe. Even more startling is that a government agency is willing to spend taxpayer money to feed this fear (Give the people what they want?). And, that a government official is so ignorant as to WARN people to stay away! Oh no!
Holy smokes. This fellow needs to go back to school...
http://www.wpbf.com/r/25316161/detail.html
On the bright side, this idiocy at least gives David Letterman some great material!
Sorry, had to rant...
Posted by Val Kells 1 comment:

About a month ago, I was at supper out with my husband and some friends. Somewhere along the way, the Spill came up in conversation. Everyone at the table was convinced that the oil was 'gone'.
No no no, I insisted. It doesn't just 'go away.' They all seemed, at least momentarily, shocked. Someone said, "But that's what we read." I replied, "Consider the source. And, consider that nothing just 'goes away', it might change forms, but it doesn't disappear. This spill was massive. Bigger than Valdez. It is an environmental disaster and the long-term affects haven't yet been realized." Again, shock. "I promise you, that oil is still out there poisoning everything from diatoms to marine mammals."
It's amazing how uncomfortable people can be with the uncomfortable truth. So, the subject was quickly changed, and we finished dinner talking about fluff and stuff.
Today, via Facebook, of all things, this article surfaced: http://www.truth-out.org/fishermen-report-louisiana-bays-filled-with-oil64564
Hmmm. Seems the oil is still... there.
Posted by Val Kells No comments: