This was posted yesterday by KGBT Action 4 News out of Harlingten, Texas.
What a shame.

I was rooting for Diana Nyad. Who wouldn't? What an incredible undertaking. And, although she didn't reach her goal, in my mind she didn't fail. The only failure is the failure to try.
Kudos, Diana!
Click here.
Posted by Val Kells No comments:

Email ThisBlogThis!Share to TwitterShare to FacebookShare to Pinterest
Labels: Oceans

When I was a little girl, I spent summers in Connecticut with my grandparents at their country home. Every evening, Grandpa would sit by the fireplace and read to us from their collection of National Geographic magazines that lined the walls. We'd sit in his lap, snuggle tight, and listen intently. Good memories.

I still subscribe to National Geographic -- one of the few paper products I'll allow myself to purchase! I think they're worth the trees. I'll save and revisit special issues, particularly those about the ocean.

My how times have changed! Now, NG is on the web, and articles are free. Or, you can get the e-version on your Ipad or other digital toy. But, no matter how you get your NG, it's remains one of the best magazines around. Click here to read the latest, coolest news on Whale Sharks, and here to go to the fantastic photos. Can't wait for my copy to arrive the old fashioned way! 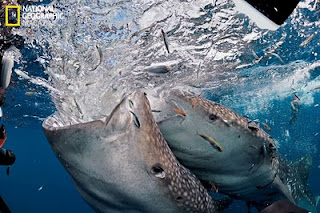 Photo Credit: (c)Michael Aw/National Geographic, October 2011 issue.
"Vying for position under a bagan, male whale sharks—two of about twenty that visit this spot—scramble for a snack. Typically an adult shark might cruise night and day at a sedate one to three miles an hour, sucking in enough seawater to feed itself. This group likely spends a lot of time in Papua's Cenderawasih Bay, making it one of a few places where the species gathers year-round. Scientists hope to cooperate with locals to launch studies of the giants."

You may recall I'd posted thoughts about the book 'Four Fish'. (My puppy ate the book. I was not happy.) One of Paul Greenberg's hypotheses was that by targeting/removing big fishes from fish stocks, humans were genetically selecting for smaller fishes. The 'big' genes are... gone! Fished out. Now scientists are conducting research on this very topic.

I hope it's not too late.
Posted by Val Kells 4 comments:

This is fascinating...
Observations: Blue Marlin; amazing how the entire body is blackish (is this a hunting color?); the boat is moving fast, yet the marlin keeps up; the marlin is not deterred by the sound of the engine; last: why in the heck didn't they throw this fish a bait?

This is an in-depth look at marine mammals in captivity, and the lengths that people will go to capture them. It is brutal, sad, and may forever change your perspective on marine parks. WARNING: graphic and disturbing content.

I own two kayaks. They are old, heavy, and not at all set up for fishing. Believe me, I've tried to fish out of them - fail! It's awkward, clumsy, frustrating. Never did figure out how to paddle and fish or just make the simple switch, without getting blown or dragged off. There's no place for my tackle or rods. It's a messy operation.

Anyway, kayak fishing is very popular these days. Especially in Florida. The 'yaks' have evolved to include foot peddles, a rudder, rod-holders, camera-holders, etc. I've seen some great pictures of yak fishermen with some beastly fishes.

But, I still can't see reeling in a monster fish while sitting! Maybe it's because I'm a 'girl' (hahaha), and I need the leverage of my whole body to bring in a big fish. Dunno. Or maybe I just haven't invested the time or money to upgrade to a kayak that is fishing friendly. Whichever...

To prove that yak angling is flourishing far north of Florida the following video from Chesapeake Bay... Very nice!

Another Step in the Right Direction!


Oh, Ocracoke. It was spared in many ways from the worst of Irene. But the island now suffers in isolation. There are only three ways onto the island: the Swan Quarter, Cedar Island, and Hatteras Island ferries. But, Hatteras is still cut off, and awaiting a temporary bridge that will span the new inlet to its north. The bridge is scheduled to go up sometime in the next month (what are those odds?) The other two ferries are only transporting residents, owners, and essential support. No visitors allowed.

At the time of this video, the north end of Highway 12 had yet to be plowed. The harbor, usually bustling, is quiet. No planes at the airstrip. It is eerily vacant when normally fishermen would be lining the beaches. Folks would be walking and biking the village.

And still, no sign of the Rascal -- my friend Noman's boat. The one we take inshore, offshore... I think it's time for a phone call...
Posted by Val Kells No comments:

Email ThisBlogThis!Share to TwitterShare to FacebookShare to Pinterest
Labels: Ocracoke 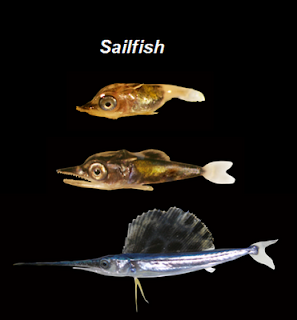 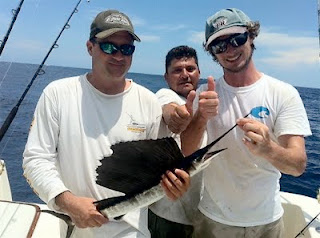 Juvenile Sailfish rarely make it into the news. This little guy is the rare exception. Generally speaking, fishermen go for the trophies - the biggin's. The fish in the above picture is estimated to be only FOUR months old and weigh three pounds. From egg to three pounds in four months? That is amazing!

So why do the juveniles rarely make the fishing news? The obvious reason is that they go uncaught by hook-and-line. Again, why? They are big enough to take a hook, but they aren't usually landed. Well, apparently, they don't occur where fishermen fish for Sails. So where are they? Do they school in a different location and at a different depth than adults? Do they feed on different prey? Are they avoiding the adults as not to become prey themselves? I haven't a clue.

According the the FAO Species Catalog, spawning takes place inshore in warm water, with females releasing up to 4.3 million eggs. Larval Sails feed primarily on copepods, but switch to fin fishes at an early age. According the the FLMNH Ichthyology database, Sails are .125 inches at hatching. They lack the long bill and tall dorsal fin. By six months of age, they are 4.5 feet and 6 pounds. Growth then decreases.

Well, this means that Sailfish are not only ravenous, but they are also successful. They are eating machines at the larval and adolescent stages. They eat... a lot! But, where? If you find out, please let me know :)