Below is a link to a beautiful collection of photos and video that was lovingly taken and narrated by Thomas P. Peschak. They also appear in the July issue of National Geographic. Clearly, Thomas is passionate and very talented.

Feeding Frenzy-Manta Rays of the Maldives from Save Our Seas Foundation on Vimeo. 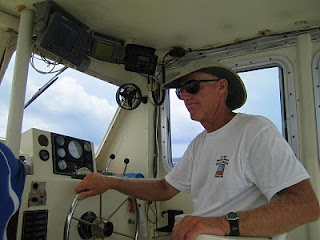 I don't know if I can paint a picture in your mind as vividly as it appears in my mind. But, here goes...

Each summer we trek it down to Ocracoken (yeah!), and we go fishing with Norman. Usually twice. He and I also find other fishy things to do: seining, swapping stories, insights, experiences.. Last summer he dropped by the house to school me on cast-netting. It's fish fish fish and more fish. The boys like fishing with Norman because he never treated them like kids. He treated them like people. He answered all of their questions (ad nauseum!), until they had no more questions to ask. He had infinite patience with them. He never grumbled. He never belittled. If they'd miss a fish, lose a rig, he may rib a little, but he'd teach some more, and set up again. No biggie. Fishing with Norman is joyous. We find awe in the biggest barracuda, and awe the smallest juvie pigfish.

Anyway, Norman is great. He's lived on Ocracoke some 30-odd years. His hands are big and gnarled and brown. His neck is deeply lined and his t-shirts tout no big-name logos. He's happy, opinionated, and hardworking. Norman grew up on the Chesapeake Bay, and will tell you without hesitation, "I had the BEST childhood EVER!" He fished and hunted and ran around wild. His mother just let him loose. He decided, well, if he had to work, why not make his work his play? Gotta work anyway, right? So he became a professional charterman. Inshore, offshore, wreck, reef, inlet, day, night.

So, the boys and I arrive at the dock at 7:30, and Norman greets me with a big big bear hug. The kind you get from your brother or sister or father after a years passing. The kind of hug that's real - not some fake tap-tap ya-ya thing. After the hellos and handshakes and my-you've-growns, he goes back to rearranging gear, and checking gear, and packing ice...and the boys go about trying to catch every manner of critter under the dock and we don't leave until 8. But when we leave it is SO happy! It's like the lights turn on and we jump right back into the conversation we left twelve months ago:

"So, you said you were having problems finding photos of some goby?"
"Yeah. But, check it out: this scientist from VIMS came through and I was able to illustrate the male."
"Ah. The male...."

And so it goes through catching bait in Teach's Hole and until we are well offshore. Bantering back and forth back and forth up above while the boys bob down on deck. Rocking and rolling our way out to the reef or wreck. Past the place where Pamlico Sound mixes with Atlantic Ocean. To the place where the water turns deep deep blue and the flyingfish zip across the surface.

This summer, we had a particularly hysterical exchange. I'll set it up for you:

We're on the reef and we're catching lots of Seabass. I've cut one finger on a gill, and another on a spine. It's "swelly" in Norman's words (read: rough and windy). My son is sea-whoosy, his friend is toughing it out, and Norman's stepson is silently fishing fishing and breaking them off. Then, his stepson catches a nice sized Atlantic Sharpnose shark. Norman grabs it around the head, takes the hook out. I snap lots of pictures. The shark is bleeding.

So, Norman, still holding the shark turns to me and says, "Did you have spaghetti for breakfast this morning?"
I pause, drink in the scene, smile wide and say, "Uh, yeah!"
"Yeah?"
"Yeah."
"Yeah. Spaghetti."
"Spaghetti."
(Pause) "What did you put on it?"
(Pause) "Butter."
"Butter!?"
"Butter."
(Norman is laughing, bending over. Bleeding shark still in hand.)
"Butter! What else?"
"Do you really want to know?"
"Yeah!"
(Pause) "Ketchup."
Norman loses it. He starts howling. Still holding the shark. I'm pinching my fingers to stop the bleeding. The blood is sticky. I run my hand under the pump water and laugh...
"Heinz Ketchup!"
"Ketchup?? Ketchup!! HAAAAA!! Ketchup!"
We are both hysterical now. The boat is heaving. The boys are staring down into the water at loose lines. My fingers and the shark are bleeding. And Norman and I have just gone back to a conversation from... one year ago? 'What does Val have for breakfast?' Norman tosses the shark back in the water.

We can't stop laughing. Is it because it's so ludiacrous, so disjunct? Fish. Blood. Spaghetti. Ketchup? Or because it is somehow, for fishermen, for us, so... normal?

Later, on the way back in (the wind has built and it's more swelly), we get on butterflies:
"Butterflies make no sense."
"I know. They defy physics. They are not supposed to fly."
"No! Not supposed to fly."
"Crazy."
"Crazy."
I can't imagine going to Ocracoke and NOT fishing with Norman. Fishing with Norman is much more than just fishing.
Posted by Val Kells 2 comments: 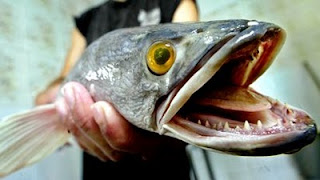 Photo credit: AP
Some of you may be aware that the Snakehead, Channa argus, made headlines back in 2002 when they were discovered to have taken up residence in a pond in Crofton, MD. It was another old story: folks with captive Snakeheads let them go in the wild... This was a frightening specter (see Lionfish), and local and federal agencies moved to erradicate the animal.

But, the efforts were not swift enough. These fish are ravenous, rapid-growing, and apparently able to move across land to new territories. From the original pond, (or from other unknown, additional locations), it didn't take long for the Snakeheads to invade streams. From there they found their way into the Potomoc River. Bad news indeed. The Potomoc River empties into the Chesapeake Bay - an enormous body of water with a huge watershed. Oh, did I mention that Snakeheads breed?

It was initially believed that they would be confined to the Virginia side of the Potomoc, and that salinity and current would act as barriers to keep them there. Again, the experts were wrong. They've now been found on the Maryland side of the Potomoc. The salinity in the Bay fluctuates with the amount of rainfall in its watershed. More rainfall in the watershed means lower salinities in the major tributaries. This in turn means that the Snakehead may just jump from one river mouth to another, hop-scotching its way into other Chesapeake tributaries.

Well, if the Lionfish is the Starling of our reefs, it would appear that the Snakehead is the Starling of the Bay.
(Sidebar: this fish was not on the original list of species I was to illustrate for Fishes of Chesapeake Bay. But Jack Musick of VIMS , one of the authors on the project, has added it. So, I've illustrated it, and it will be 'in the book'. That's not a good thing...)
Posted by Val Kells 1 comment:

I love it when fishermen and scientists come together for a united cause!
Posted by Val Kells No comments: 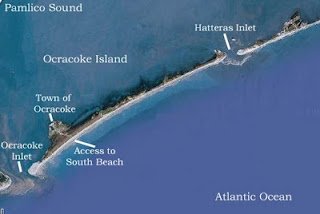 Ocracoke... ahhh...! In a round-about way, and with many detours and forks in the road, we discovered Ocracoke. That was eleven years ago. We have been trekking it down there ever since for two weeks of beach, water, fish, ahhh...! To this day, I still find no reason to alter our family tradition. It's got everything we love in an island destination, and none of the stuff we are trying to escape. No golf courses, no big hotels, no malls, no waterslide or putt-putt parks, movie theaters, Harris Teeters, rush hour... heck, there isn't even a stoplight on the island! If you like to fish, read, ride your bike, do a little (and I mean little!) shopping, fish, surf, boogie board, four-wheel on the beach, fish, grill out, and generally kick back -- Ocracoke should be on your list of desinations.

Ocracoke has a history dating back to the 1700's. And it is where Edward Teach (Blackbeard) met his demise. It has a rich history of fishing and trade. Accessable only by ferry, the island constitutes about 16 miles of National Seashore...sand, dunes, maritime forest, birds, fish. To the NE is Hatteras Island, to the SW, Portsmouth Island. "Dr. Beach" dubbed Ocracoke the number one beach on this 2007 list (much to the chagrin of some locals, who didn't really want anymore traffic!) There is no development on the ocean side - no 'McMansions'! The town is small, salty, and centers around Silver Lake. Many folks leave their cars at the house, and prefer to bike or walk. The speed limit is 20 mph... There is public camping on the island, foot bridges to the beach, and 4X4 accesses.

Did I mention the fishing is awesome? The fishing is awesome. The island is close to the Gulf Stream, and abutts an enormous estuarine system along Pamlico Sound. When you are on Ocracoke, you are litterally surrounded by water. Besides Ocracoke and Hatteras Inlets, there are many channels, holes, shoals and flats to fish. Offshore there are Wahoo, Dolphinfish, tunas, mackerels, grouper, barracuda, Spadefish... Inshore there are Redfish, Bluefish, Weakfish, flounders... Off the beach folks catch kingfish, pompano, drum... the list goes on and on. I'll save my seining stories for later.

Bottom line: we arrive delighted, and return with deep tans and wonderful memories. Go there!
Posted by Val Kells 2 comments:

Visit msnbc.com for breaking news, world news, and news about the economy

Why does government take so long to respond to crises? The Lionfish, Pterosis volitans, is believed to have been introduced between eighteen and ten years ago, possibly off of North Carolina or Florida, either by accident or by release. Regardless of how they arrived in non-native waters, the species has since taken a firm hold with a range that extends to the Bahamas and Caribbean. They've been documented from as far north as New York, and east to Bermuda. According to MSNBC, Florida officials are concerned about the "sudden appearance" of these fishes. Sudden? Check out this map of the documented sighting in the Keys alone. So, they are enlisting the help of lobster divers to help eradicate the fishes from the area in a two-day spree. Two days? From what I know, it will take a full-out war to reverse its spread. However, each dead female Lionfish prevents up to possible 15,000 eggs from dispersal. So, go for it Florida divers!