Articles like this attempt to spread exaggerated and false information which lead to misconceptions, hysteria, and slaughter of innocent animals. 'Monster?' 'Rampage?' What 'experts'?

However! Based on the comments left, at least some of the readers are not buying the gruesome picture the author is trying to paint.
Posted by Val Kells No comments: 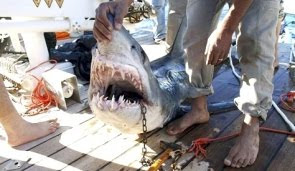 Most fish hatcheries are built like spillways. They resemble long, rectangular pools, with water flowing in one end and out the other. The hatcheries I've visited are usually near a water source. Fish of similar sizes swim against the flow. They are all fed pellets, probably made from fish meal. When the fish are of size, they are shipped and released into streams, rivers, oceans.

A hatchery fish is easily distinguished from a native fish. (At least an experienced fisherman can distinguish them.) The fins can be underformed. The colors not as bright. The flesh is not as sweet as wild flesh. And, they are voracious. Even I, a technique-challenged fly fisherman, can catch one. The hatchery fish I've caught seem almost... dumb. They ate even the most poorly presented or built fly.

On a scientific level, this may be an important observation. From what I've read, hatchery fish do indeed 'water down' the native gene pool. Yes, they provide meat and take pressure off of wild lineages in the face of declining, healthy habitat. But problems with farm-raised fish abound: hatchery fishes are more prone to disease and parasites; the water they are raised in is Nitrogen rich, which leads to algal blooms and subsequent loss of Oxygen; the fish-meal pellets they eat may have high concentrations of toxic chemicals; they take from 6 to 3 pounds of pellets to grown one pound of flesh (not exactly good for the baitfish populations!); they are not 'wild' and therefore probably not able to migrate like wild stocks - so if they do reproduce, the subsequent fry may be inferior.

Regardless, hatcheries are here to stay. As the human population grows, so does demand for food. Wild stocks might be wiped out if not supplimented by hatcheries. The challenge is making them more environmentally friendly. On that score, there is some good news.

It was recently discovered that circular tanks yeild healtier, stronger fish that have less impact on wild fish. The tanks use less water and are easier to clean. Many problems still remain, but this is at least a step in the right direction.

SIDEBAR: "Four Fish" by Paul Greenburg explores the deep and very complicated relationships between four major foodfish and humans. I have not finished the book, but have found it to be exceptional thus far.
Posted by Val Kells No comments: 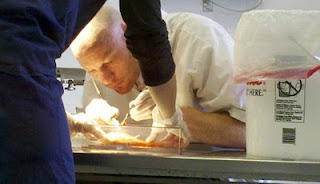 Seems like a flashy title for a critter so small. But to many people, including myself, fish can take on as much importance as pet dogs, cats, horses, pigs...

Our family kept fishes for well over a dozen years. The tanks were always in a bit of flux as the fishes duked it out - some surviving, most not. Neons, zebras, ghouramis, suckers, killis, you name it. We even had a Largemouth bass, and a slew of Bluegills raised from fry. When the electricity went out, the fear was not a melting icebox, but a cold fish tank! We fussed and loved over the parade of fishes. And, many a tear was shed when a particularly favorite fish passed. We gave them the same honors as our other pets: a ceremony, and a respectful burial. I'm not lying!

I had a Beta (named 'Gamma') that kept me company for three years while I completed my book. By some miracle, he lived just long enough for me to reach my deadline. That fish made me smile, in return I took very good care of him. Go ahead and laugh, that's OK. I'm not alone.

People will go to great lengths to save a furry friend. And some may do the same for pet fishes. Others may not. The stories of "flushed" goldfish abound. This goldfish was lucky. And I'm glad these folks felt this fish was just as worthy of surgery as any other beloved pet. Why not? 17 years is a long time to have a fish!
Posted by Val Kells No comments: