This is cool...
I was poking around the internet in search of video of Megamouth and Goblin sharks. Amazing what you can find on YouTube! I found video of both -- living video.
By accident, I also found this video of a young Salmon Shark that was lucky enough to fall into the right hands.
Spoiler alert: All's well that ends well :) 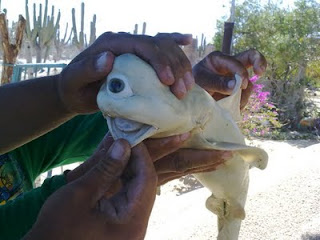 Apparently, instances of Cyclops phenomena are not too rare. That said, I've never seen a Cyclops fish. From what I gather, this is a Bull Shark fetus. And, investigations are ongoing. If I find anything more, I'll post... Click here to read article.
Posted by Val Kells 4 comments:

Email ThisBlogThis!Share to TwitterShare to FacebookShare to Pinterest
Labels: Fish 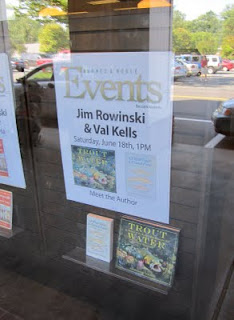 A week ago Saturday I had a book signing at the local Barnes and Noble. They'd set up a small table for me and Jim Rowinski. Behind me they'd stacked a large pile of my books to sign or personalize. I thought, "No way. That's too many books." Boy was I ever wrong.

At one o'clock sharp, a long line formed in front of me. We had to move the table back to make room. There were some familiar faces -- my mother-in-law, my niece, some golf buddies. Most I'd never met before, but with them I shared similar passions: fish, fishing, diving... There was a retired Ichthyologist. There was a mom whose daughters loved to dive (she took pictures). There was another mom whose daughter was studying marine biology at UF. Someone asked me to sign the Daily Progress article so she could send it to her parents in California! Many bought mulitple copies of the book for friends and family.

But the one person who left the biggest impression on me was someone I didn't get to meet: a fourth grader who loves to fish, and paint and draw fishes. He is also painfully shy. When his mother arrived at the table, she kneeled down beside me and told me his name is Luke and he was hiding in the stacks. He wanted to meet me, but his shyness was in the way. She had a folder of his artwork to show me, and a copy of my book to dedicate to him. The artwork looked like mine at his age. And the book! The book was dog-eared, dirty, and had seen some serious action. She said he'd been taking it with him on the bus to and from school. He wouldn't get in the car without it. He was reading it, using it to paint. It looked like he'd been trying to memorize it! The sight of it gave me goose-bumps.

If in some small way I've helped inspire and fan the fires of this young fisherman, then my mission was accomplished. If in some way what I've done lives on in him, then that's icing on the cake! If he takes what I did, expands on it, uses it to create something bigger, better, then... I have no words.

Cheers, Luke, where ever you are. Keep up the good work!
Posted by Val Kells 1 comment:

This is cool. This Leatherback sea turtle returns to Juno Beach each summer to lay her clutches of eggs. She's sustained injuries to her hind flippers that prevent her from digging a properly deep nest. So, volunteers help her out. Click here to read article!
Posted by Val Kells 1 comment:

Oh Yeah...! Finally! The definitive Fish Nerd List. Sadly (or perhaps happily?), I qualify. I laughed my way through this list, while nodding my head, 'Yeah, that's me. Yep, me again. And, again...and again..." Too funny. I actually knew the lyrics to "Fish Heads", and the video cracked me up. Alas.... Fish Nerds. We are a pathetic, yet deliriously giddy bunch.